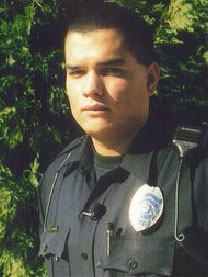 As a result Mr. Contrereas is now blind in one eye. After shooting Mr. Contreras the perpetrator then turned the gun on Detective Arango shooting him in the left leg, left side of the head, and one through his Police Department issued badge. The shots to the head and to the badge were done at close range. As Detective Arango laid in the parking lot incapacitated, the perpetrator and the second subject fled the location. Detective Arango was unable to call for help however a club patron picked up his in car radio and began yelling for help. Doraville Police department units responded and administered CPR until he was transported to a local hospital where he was pronounced dead. In what was considered at the time the largest manhunt by law enforcement agencies in the history of the State of Georgia, this cop killer was apprehended several days later hiding in the woods near a horse farm where he had been held up.

After a lengthy trial in which the perpetrator had three court appointed attorneys, the perpetrator was found guilty in the murder of Detective Hugo Arango and sentenced to life in prison. For those of us who worked with Detective Arango he will live forever in our hearts and we will fight for his killer to never be released from prison.
UA-12108941-1